Somerset Regional Council will seek funding from the Australian Government to pursue several pest management initiatives in the region.

Somerset Mayor Graeme Lehmann said he recognises the significant impacts pest plants and animals cause on the environment and management is imperative to control.

“Council is committed to working with landholders and industry stakeholders to manage the negative impacts for the benefit of all residents,” Cr Lehmann said.

Council will seek funding from the federal government to potentially fund initiatives including rabbit harbour destruction, aerial treatment of parthenium, expansion of council’s chemical subsidy program and extension of council’s lantana program to include council roads and reserves and state controlled land.

This funding would be in addition to council’s ongoing annual pest management budget.

Recognition and Protection of Koala Habitats in Somerset Sought

Somerset Regional Council will seek greater protection and recognition of existing koala populations in the region.

This comes off the back of the Queensland Government releasing its Draft South East Queensland Koala Conservation Strategy 2019-2024 in December 2019.

Council recognises that Somerset is home to significant koala populations and will seek to have these existing known habitats included and protected.

The strategy is open for public comment until 31 January 2020.

“The money will be held by Council and distributed to various individuals and or groups in accordance with Council policy to ensure the distribution of funds assists those in the face of adversity.

“Council will also consider funding applications in due course from residents impacted by bushfires in the region.”

Somerset Regional Council will donate $2 from each entry into the 2020 Somerset Rail Trail Fun Run or Ride to the Leukaemia Foundation of Australia.

The 18th annual event will be held on Sunday, 12 July between Fernvale and Lowood along the iconic Brisbane Valley Rail Trail.

Somerset Mayor Graeme Lehmann said the Leukaemia Foundation was a not for profit charity that is the only national charity dedicated to helping people living with leukaemia, lymphoma, myeloma and other blood related disorders to survive and live a better quality of life.

For more information on the fun run visit www.railtrailfunrun.com.au.

Extended opening hours at Toogoolawah Library will continue until 30 June 2020.

Somerset Regional Council has reviewed a request from residents to upgrade a road at Coominya.

Council received a petition, signed by 26 people, in November 2019 requesting upgrades to Mahon Road sighting dust nuisance as one of the concerns.

Council had previously considered upgrading Mahon Road, following the 2011 floods, however the cost was about $17 million.

Council had decided previously that due to the high probability of damage during future flood events it would not undertake the extensive upgrades.

Council again considered the request and its position remains unchanged.

Somerset Regional Council has awarded a sporting bursary to a young athlete in the region.

Samantha Bremner was selected for the Under 13 Female State Cricket Challenge to compete at Bundaberg in January and received a $100 bursary.

The funds have been made available through Council’s Community Assistance Grants scheme which is open to all Somerset residents who have been recognised at regional, state or national level in a competition or event, in an academic, cultural or sporting field.

Somerset Regional Council has recognised the efforts of four long term employees who together have amassed almost a century of service.

Madeline Jelf, Senior Planner, was recognised for a decade of service.

Geoffrey Smith, Director Finance, was recognised for 20 years’ service. He started with the former Esk Shire Council in 2000 as Manager of Finance following a long career in finance.

Bob Peters, Foreman with the Esk bitumen crew was recognised for three decades of service.

Mr Peters started with Council in 1990 in a temporary role and, over the years, has held various positions before being promoted to foreman in 2005.

Bruce Zinn, Foreman with the council’s construction and maintenance crew was also recognised for 30 years service.

His career started with Esk Shire Council as a bridge carpenter and progressed to bridge ganger in 1999 before later becoming a foreman.

Somerset Mayor Graeme Lehmann congratulated each of the staff members on their long service and dedication to their roles and to council. 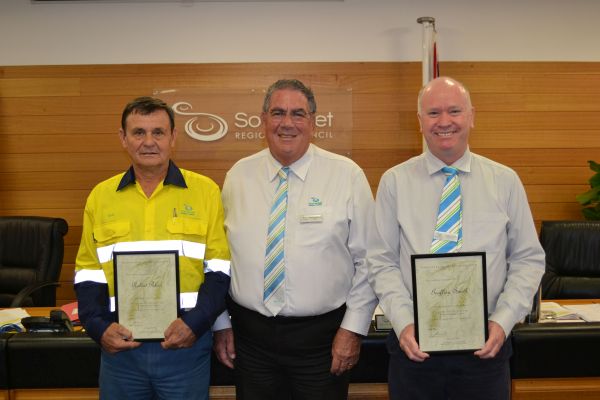 NB: Somerset Regional Council held its meeting at Esk at 9am on Wednesday, 22 January 2020.