“I would also like to thank two retiring councillors, Deputy Mayor Dan Hall and Councillor Otis Ogg for their contributions and wish them all the best for their future endeavours,” Mr Johnson said.

The local government elections will be held on Saturday, 28 March 2020.

Somerset could see vital infrastructure projects fast-tracked in the region following a request from the Australian Government for council to put forward projects that are “shovel ready”.

Council will put forward eight land transport projects in the region that would improve safety and productivity and support key industries.

Together the projects total more than $15 million and if successful, Council will contribute 50 per cent of the project costs.

A letter from Deputy Prime Minister Michael McCormack to Council requested details of infrastructure projects that could be brought forward to start construction within three to six months.

"Fast-tracking the delivery of critical road projects across Australia is key to driving jobs, strengthening the economy and getting people home sooner and safer," Mr McCormack wrote.

The projects include replacing timber bridges in the region to improve rural safety and productivity, strengthen 17 timber concrete hybrid bridges, widen and strengthening of Mount Tarampa Road, improvements to Lowood Minden Road and Rasmussen Road at Mt Archer, improvements to the Brisbane Valley Rail Trail and renewal of Aston Park at Kilcoy.

Improvements to Lowood Minden Road is a project estimated to cost in excess of $10 million.

Somerset Chief Executive Officer, Andrew Johnson, said the projects would bring significant benefits to the region if given the green light.

Somerset Regional Council has granted a temporary event approval for the Brisbane Airshow 2020 to be held near Toogoolawah on Saturday, 4 July and Sunday, 5 July.

The airshow will be held at Watts Bridge Memorial Airfield and event organisers, Australian AirDisplays, are expecting up to 10,000 people to visit the show each day.

Council is proud to be a major sponsor of the event in 2020.

Somerset Regional Council has approved a service station and two food and drink outlets to be built on the fringe of Fernvale’s central business district.

The centre will operate 24 hours a day, seven days a week.

Council Chief Executive Officer, Andrew Johnson, said council had approved the development application and imposed conditions, in line with council’s planning scheme, to best protect residents and the amenity of the area.

“This DA takes nothing away from existing businesses including on-street carparking and provides confidence in Somerset in terms of growth and development,” Mr Johnson said.

Somerset Regional Council has recognised the efforts of two long-term employees who together have amassed three decades of service.

Helen Golinski, corporate and community services officer with vast experience in customer service and administration roles within council, was recognised for 20 years’ service.

Somerset Council Chief Executive Officer, Andrew Johnson, thanked the employees for their long service and commitment to their respective roles. 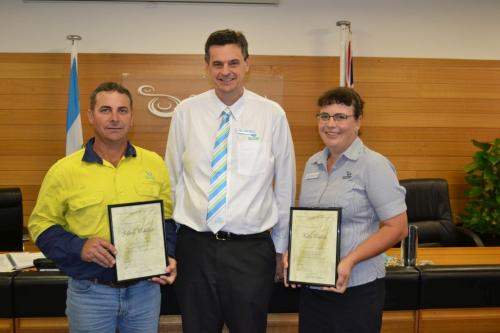 NB: Somerset Regional Council held its meeting at Esk at 9am on Wednesday, 11 March 2020.